How Does a Diesel Smoke Meter Work?
Sorry,Your browser is not supported.

For an improved experience, please update your browser to one of the following: Testing for emissions isn’t just about hitting environmental targets – it’s an essential health check of your vehicles’ engines that can help your business to save money on fuel and maintenance.

But while the smoke meters themselves are built to be user-friendly, understanding the readings isn’t as simple as it seems.

Here’s everything you need to know about how a Diesel Smoke Meter works – and how to make sure your vehicles are compliant:

What is a Diesel Smoke Meter?

You’ve already guessed it – a Diesel Smoke Meter is a tool that measures the level of smoke produced by a diesel engine.

It’s an important part of servicing any kind of diesel vehicle, giving you an accurate reading of both the efficiency of the combustion inside the engine, and the levels of harmful emissions the engine is producing.

And that makes it an essential requirement in MOTs – especially when it comes to the Euro 6 Standards for emissions and pollutants.

So how does a smoke meter actually measure the levels of smoke in a vehicle’s exhaust?

It’s all about opacity

Opacity is the measure of how much light gets blocked by a substance (the opposite of transparency).

What kind of readings does a smoke meter give?

Most diesel smoke meters work with a special unit of Smoke Density that’s expressed on a per metre basis (for example, 1/m or 1m-1).

It’s not an informative unit on its own. But that’s because it’s actually a complicated function of several different things – the number of smoke particles in a volume, the size distribution of those particles, and the light absorption and scattering properties of those particles.

So if you’re using a smoke meter in your workshop, all you really need to know is this:

A higher number on the smoke meter means a higher density of smoke in the exhaust.

So what is the DVSA looking for?

When you’re using a Diesel Smoke Meter, you’ll see a number on the display that represents the density of smoke in the vehicle’s exhaust.

But that’s not much good on its own – you’ll need something to compare it to.

Any vehicle manufactured after 1980 should come with a manufacturer’s plate that displays the maximum smoke level limit for that vehicle. That could be either the VIN Plate (Vehicle Identification Number), or a separate plate or sticker found in the engine compartment.

But with newer vehicles – ones affected by the increasing restrictions of environmental legislation – the government has set their own smoke level limits that you need to be aware of:

You can find detailed instructions that cover the steps you need to conduct a diesel smoke test on the government’s MOT Inspection Manual.

But it’s also worth noting the specific conditions that need to be met. A vehicle passes its opacity test if any of the following happens:

If the vehicle passes the test, you’ll need to keep a retrievable record of the test for 3 months.

If the vehicle fails, you’ll need to give your customer a copy of the results, as well as keeping a retrievable record for 3 months.

Ready to get testing?

Testing exhaust emissions is just one essential part of servicing any kind of diesel vehicle – and we’ve got the ideal Diesel Smoke Meter for the job.

It’s MOT-approved, accredited to Euro 6 Standards – and built from the ground up to be accurate, portable, and robust enough for the everyday rigours of a demanding MOT bay.

So if you’re looking for a long-lasting and professional smoke meter, check out our new online shop to find the latest deals – or talk to one of our experts to find out more.

What our customers think

Saving us time, fuel and other costs… The brake tester is saving us time, fuel and other costs to ensure that we continue providing the highest level of road safety for our fleet.

Will make a real improvement… Delighted with the mobile column lifts… 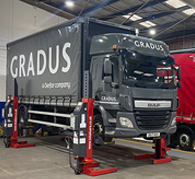 We are delighted with the mobile column lifts from Totalkare and quality of aftersales service we have received.